First family photo - I'm the one holding her

It was fantastic, OH was amazing, and we got home yesterday evening. Our girl is absolutely perfect, and we are completely besotted.

I’ll blog more later when things have settled down.

We saw the midwife again yesterday and she managed a membrane sweep. Baby is much lower, but not in a brilliant position. The sweep hasn’t moved anything along, we’re still waiting but with no signs she’s moving of her own accord.

The midwife rang the hospital and has booked us in for induction next week. Whether she likes it or not, baby is being evicted on Thursday!

So we’re still sitting around waiting. OH is uncomfortable and fed up. We’re trying to find things to do and ways of getting out and about, while staying close-ish to home and not overdoing it. We’ve been swimming a couple of times, which OH likes as it is much easier for her to move around in water than on land!

So. Back to waiting. Come on out baby! We can’t wait to meet you!

It’s official. OH is overdue. Her due date was Saturday (obviously we know very few babies come on their due date) but nobody told baby that!

We’re seeing the midwife this afternoon. At this appointment, the midwife will do a membrane sweep, and book us in for induction, should little’un still be keeping us waiting in a fortnight.

We both really want her to come of her own accord, and not be rudely evicted – I think it’d be a much nicer experience all round. I’m so impatient now though! We haven’t just been waiting 9 months for this, but 3 years and 9 months – trying to find the money for the treatment, going through 6 failed IUIs and 1 cancelled cycle, and finally the successful IVF.

We’ve been trying various methods of inducing labour naturally – obviously none of them actually work but we try anyway! Eating lots of curry, eating pineapple, bouncing on the birthing ball, walking lots, playing with the maternity TENS machine. We haven’t tried the nipple stimulation as you have to do a lot of it to make the slightest difference. No way is she trying castor oil (how nasty would it be to have the shits during labour?). We know that next to none of this will make a difference, but at least it feels like we’re doing something! And at least curry tastes good 😁

And so I’m sitting here in bed, watching as little’un hiccups away, and hoping the wait will be over soon. We just can’t wait to meet her!

Much has changed since I last blogged. England spectacularly lost The Ashes. The Church of England has voted in favour of women bishops. Everyone on Facebook and Twitter seems to have chucked buckets of icy water on their heads…

AND OH IS PREGNANT!

Our first IVF was successful, although not a particularly smooth road. She responded poorly to the drugs, and only had 3 eggs. 2 fertilised, so we transferred both of them. And one implanted and has grown into our amazing baby girl, who is due to arrive on Saturday! Obviously she is unaware of this, and is highly unlikely to make an appearance on Saturday, but she’ll be here soon.

We found out the amazing news on December 23rd. OH was convinced it hadn’t worked. On December 22nd, I was preparing to scrape OH off the floor as we coped with another childless Christmas, singing carols about a mother and child and trying to hold it together.

Instead, we sat in my parents-in-law’s bathroom, waiting for pee sticks to give us the confirmation of the bad news. OH put the first response test in the pee first, and then as she was holding the clear blue digital in the cup, she said “oh my God, there’s a 2nd pink line appearing!” Her hands began shaking, and I thought she was going to spill pee all over the bathroom. In the mean time, the little egg timer on the digital test went round and round. After an eternity, it said “pregnant 1-2 weeks”. We were gobsmacked, and retreated to our room to try and get our heads round it.

Eventually, we went downstairs to tell OH’s family. OH simply said “mum, you know how you bought all that Brie? Well I can’t eat any of it”. I sent text messages to all family and friends who knew this had been testing day. At 8am (when the clinic opens) we rang them, and spoke to the one nurse who didn’t know us. The conversation kind of went:

OH: I’m calling to say I did a pregnancy test this morning and it’s positive

Nurse: was it a spontaneous pregnancy?

Every other nurse would have known this couldn’t be the case, and we would have loved to speak to any of the others who had been with us through the whole journey.

We went out and bought a big pregnancy book with week-by-week pictures and writing about what baby was doing and how she was growing each week. And every Saturday morning since, we’ve got the pregnancy book out and looked up how our little one has been developing.

It hasn’t been smooth sailing. We were so stressed after what had happened previously, and until the 12 weeks scan I was really terrified. OH had terrible morning (and noon and night) sickness. I lost my job in May.

But now OH is 40 weeks on Saturday, and if baby is reluctant, OH will have a sweep on Monday, then one a week later, and then be induced after that.

We’re desperate to meet her. OH is uncomfortable, and the house is pretty much all set, both for baby and for the impending arrival of my in-laws, who will come down from Scotland to stay once little’un arrives.

It’s been a difficult journey so far. 6 unsuccessful IUIs, 2 miscarriages and a cancelled cycle has taken its toll, and coping with it all has been hard.

This last few weeks I’ve filled my time with lots of baking. Bread, cake, quiche, all sorts. And it’s helped. It keeps me busy and I feel like I’m achieving something.

Unfortunately there’s only so much baked goods we can eat, so I have to rein it in a bit. Bit at least I’ve found a way to cope.

Except there is, in a cake box in my kitchen, made by me! Check it out!

A friend asked me to bake a Gruffalo cake for her son’s birthday. I wasn’t convinced I could, but decided I’d give it a go! This was the test run, and I am so proud of it. It’s even made it onto the Great British Bake Off website, along with the fantastic, amazing cakes others have made. I’m just over the moon with it!

I’ll be making another for the actual party. As I say, this is just the test run.

So now I’ve got to figure out what the hell I can do with a giant chocolate Gruffalo?

I have been neglecting my blog somewhat of late. It simply seemed there was nothing new to say: OH had more IUI, it wasn’t successful. As I’d expected – I have completely lost faith in IUI, and the most recent was more going through the motions, the only thing we’d get from it was IVF on the NHS. Which is where we are at.

Now we’re at IVF stage, I seem to have lost the plot. I’m low, exhausted and just don’t seem to know how to cope. OH has found her way: read every book ever written about IVF, and improve her diet.

On the plus side, the clinic appointment required before commencing IVF is sooner than expected – under 2 weeks away, which is impressive for the NHS. Past experience had us expecting a month or more. This is heartening.

We’re armed for the appointment with a dissertation-length list of questions, a list that grows every day! I am quite nervous about the appointment – that we’ll be disappointed in some way, that I’ll turn into a blubbing mess. I hate crying in front of anyone other than OH, and that’s bad enough.

I am sorry this is not a happy post, but optimism is thin on the ground for me right now.

OH recently posted the obligatory fertility drugs pic on her blog. However, I can rival/beat her with my daily drug consumption: 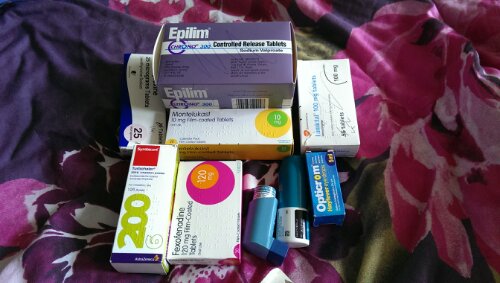 This treasure trove of delights is my current survival kit for my bipolar, hayfever, asthma and under active thyroid! This does not include the occasional extras, such as diazepam, migraine meds and steroid tablets!

I think you’ll agree it’s quite impressive! And sort of irritating from my point of view.

We had our 5th IUI yesterday.

It was traumatic again.

Once again, the Dr had huge problems getting the catheter through OH’s cervix (she has a retroverted uterus). She tried 2 different catheters and made so many attempts. Eventually, she put a clip on OH’s cervix, which, as you can guess, was very painful.

I ended up stressed too. I hated feeling so powerless, watching them try again and again, as OH lay there in pain. All I could do was hold her hand, and it felt so inadequate. I wanted to make it better. And there was also the worry that the wouldn’t be able to get it to go through.

It felt like we were in theatre ages. I can only imagine what it must have been like for OH, feet in stirrups, speculum in the whole time…

Thankfully they got there. I really hope this is the one. It’s been so gruelling this time. Please pray for us x

I need to bake a something for work soon, and as I’ve done cakes a few times now, I’m looking to branch out.

The options are:
Summer berry cheesecake
Some kind of fruit tart

OH has voted cheesecake. What do you think?

Adventures Of A Little Captain

And The Parenting Journey Of Two Moms

Thoughts From The Other "Real" Mom

A journey of two Mamas trying to make babies the natural way...

Two hopeful women on the journey to motherhood...

the loveliest and the saddest landscape in the world

two moms and a new baby

Ttc journey and beyond...

A journey through donor insemination, miscarriage, and faith